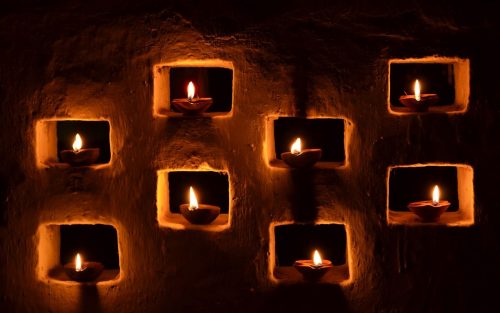 by Ashutosh Vardhana
FROM OUR ARCHIVE – Oct 2002

When evil had once again become too strong on earth, God, so the story goes, took on a human body and became Ráma, son of the king of Ayódhya. He grew up in every respect like a human being of his class and as a model of honourable behaviour.

In order to be true to a promise unwisely made by his father, he, his wife Síta and his brother went into exile for fourteen years. At the end of this time, he fought and won a battle with the valiant demon king Rávana. Then he and Síta returned in triumph to his capital Ayódhya, his loyal subjects rejoiced, adorned the city and filled it with lights. That’s why Hindu families light up their houses on this day. 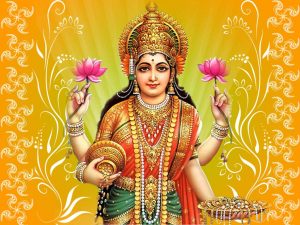 Diwáli is celebrated at home rather than in temple. For this day Hindus thoroughly clean their houses, paint rangóli patterns in front of them and in their court yards. They put díyas (ghee lamps made of clay) on their window sills and at their doors. We want God in his various manifestations, especially Ráma, Síta and Lákshmi, to enter our houses, and keep burglars and bad people out. People also let off fireworks.

On Diwáli night prayers to Lákshmi, goddess of wealth, are said (Lákshmi púja), and business people have their accounts books for the next year blessed.

On the next day, in many parts of India, we celebrate New Year (Hindu calendar). We offer a large number of traditional foods (annakút) in the temple. These are later shared by the devotees as prasád (food offered to, and blessed by, God). People then visit one another in their homes and wish them Happy New Year. 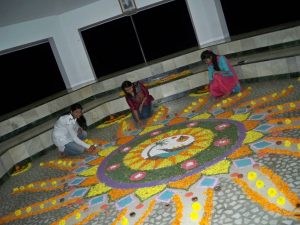 In Gujarati/Hindi ‘Happy New Year’ is translated as ‘Sal Mubárak’, an Arabic expression, which Gujurati Hindus have adopted from their Muslim neighbours. This is a sign of ancient togetherness and harmony, and we all hope that such harmony between all good and peace-loving people (as most are) can soon be re-established and the Muslim and Hindu communities wish each other ‘Sal Mubárak’.

Sikhs also celebrate Diwáli: their religion grew out of Hinduism. Diwáli is a landmark for their religious freedom, for the sixth Sikh Guru Hargobind Sahib and 52 Hindu kings were released from prison on Diwáli day in 1619.

The deeper meaning of this festival is that Ayódhya is our heart. We should purify it so that God can enter and live there. We should worship God in our hearts. An old Sanskrit proverb says:

A thousand Rámas born in Ayódhya will do no good, If He is not born in you.